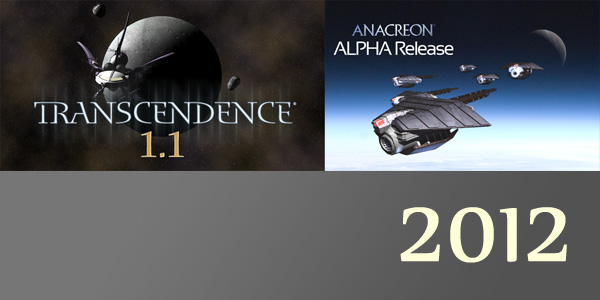 I started Kronosaur Productions approximately 5,840 waking hours ago and I'd like to recount what I've been doing in all that time. 2012 was a year of investment: I invested time, energy, and money into three projects that will (if they pay off) end up being the foundation of the company.

The first investment was the most reckless: I spent a lot of time writing my own server software.

All web sites, from your local pizzeria's page to your online bank, are built using three major components: an HTTP server, a database, and a scripting engine. An HTTP server knows how to talk to your web browser (or your mobile phone), and it can keep up with conversations even if thousands (or millions) of browsers are talking to it at the same time. A database, of course, has to store and retrieve information efficiently and it must do so without losing anything. The latter is surprisingly challenging given the fallible nature of disk drives and networks. And finally, the scripting engine is what allows each web site to have unique functionality. A web developer writes programs to make a site behave like a bank instead of like Facebook. It is the scripting engine's job to execute these programs faithfully and efficiently.

There are dozens of reliable, proven, and free examples of each of these three components: The most common and traditional approach is to use Apache as an HTTP server, MySQL as a database, and PHP as the scripting engine. Edgier companies are using Nginx, a NoSQL database, and Node.js or even Erlang. You really can't go wrong with any of these—all are successfully being used in large, high-traffic sites. The only thing they tell you not to do, is to write it all yourself. And of course, that's exactly what I decided to do.

I spent the first part of the year writing Hexarc, a piece of server software that handles all three of the processes above. Hexarc is an HTTP server with a built-in database and a scripting engine. The advantage of this approach is that all three of the components are tightly integrated. I hope that this will make it easier to create and maintain web sites. In my fevered imagination I hope Hexarc will someday be used by beginners to create their own web sites, in much the same way I used Turbo Pascal as a kid to write my own games.

Will this investment pay off? It is much too soon to tell. Hexarc is now up and running; it is hosting the Transcendence Multiverse and the Anacreon alpha release. But many questions remain: Can it handle thousands of users? Can it prevent hackers from breaking in? (Note: this is not an invitation to try.) Can it really make web development easier?

Later this year I will release Hexarc as an open source project, and I hope to recruit volunteers to help with its development. I don't know what will ultimately happen with this investment, but I know I had a lot of fun working on it.

Last year I doubled-down on my investment in Transcendence mods. I've said it many times, but the thing that I'm proudest of in Transcendence is the number of people who have created extensions or "mods" for the game. With the release of Transcendence 1.1 I've laid down the foundation for a mod marketplace.

http://en.wikipedia.org/wiki/Mod_(video_gaming|Mods]] are a well-honored tradition in computer games; they are the equivalent of fan-fiction. After watching Star Wars, all my (male) friends started drawing TIE-fighters chasing X-Wings on their school notebooks. In a deep and engaging game, particularly one with a well-crafted fictional universe, it is impossible to resist the temptation to create your own enhancements and stories in that universe. In a computer game, you can create a mod that is as real as the original game. It's like getting access to all of George Lucas's models and equipment and filming your own dogfights.

In 2012 I worked on a way to distribute these player-created mods through the game itself. When the work is complete, players will be able to browse, download, and rate these mods. Many of these mods are as creative and interesting as anything in the vanilla game. Some radically change the game-play and breath new life into the game. Ultimately Transcendence will have a marketplace for selling some of these mods.

More importantly, I launched the Transcendence Registered Developer Program. The program consists of a group of mod writers who will be the first to populate the new marketplace. Together we have planned out some initial mods and worked to refine the backstory of the Transcendence Universe. There is much work remaining, of course, but I expect that we will release our first official mods sometime in 2013.

My third major project in 2012 was Anacreon 3. Next year will be the 25th anniversary of the original release of Anacreon and believe it or not there are some people who have been playing it since then. My plan with Anacreon 3 was to redesign the game as web-based massively-multiplayer game. I believed (and still believe) that such a format is ideal for Anacreon—just imagine hundreds of players competing to colonize the galaxy.

But I was still nervous: Could I successfully convert the original rules to a massively-multiplayer format? Would the hardcore Anacreon fans accept the new game? Would the game be any fun?

What most concerned me was the pacing of the game: How fast should fleets move? How quickly can planets develop? If the game was too slow then people would get bored waiting for something to happen. But if it was too fast, then you could lose your empire while you slept through the night.

I originally wanted to release an alpha in September 2012, but I couldn't complete enough pieces. The game was unplayable. In October I could more or less play a game, but there wasn't much to do so it wasn't too much fun. Finally, by mid-November I started having fun when I played. Anacreon 3 was by no means done, and it wasn't even as fun as the original yet, but I felt that it was a good start.

On December 4th I posted a link to the alpha release on the Anacreon Facebook group. Given the state of the game, I expected people to spend no more than a few hours playing it. But a month later there were still about 20 to 30 people playing it every day. Of course, they were all fighting innumerable bugs, design issues, and server problems, but for the most part, I think, they were having fun!

For me playing the game with others was so much more fun than testing it alone. One time I watched an enemy fleet of powerful Sirius-class gunships making its way slowly towards my worlds. I quickly dispatched faster but weaker defenders, but I didn't know whether they would be enough. Every minute the gunships came closer and my pulse raced anticipating the coming clash. When the gunships finally arrived, they unleashed a barrage of fire against my defenders. But my defenders fought back and then..."ERROR: Internal server error." Well, it is an alpha release after all.

There still a lot of work to do. I need to work on scaling the server to support many more people. I need to work on game balance to make sure that newer, weaker empires can hold their own against stronger, established one. And, of course, I need to fix lots of bugs. But I'm very happy with the results of the alpha test, and I believe this new version of Anacreon has immense potential for the future. It will be the foundation of a new and better Anacreon that (with much luck) will last for another 25 years.